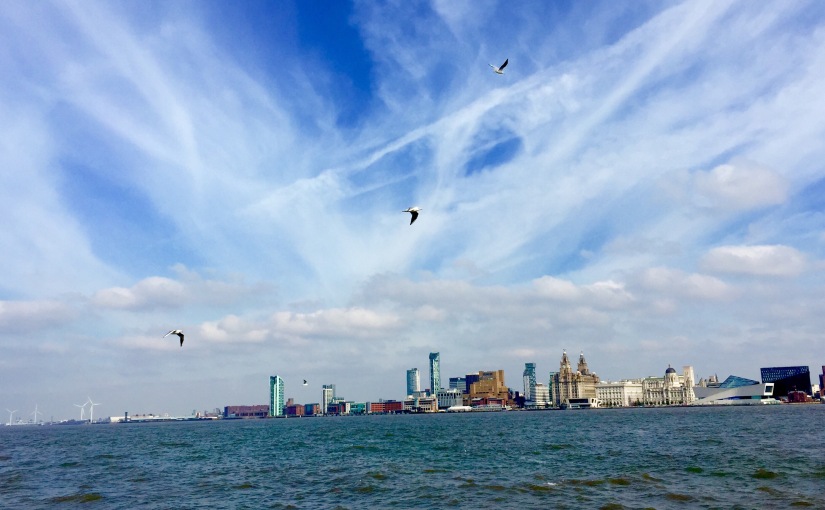 After an early night (for me) and chilled evening with friends Andy & Lauren Scott, I left Sandbach at 8.30am.

It was a bright, crisp morning with that sort of early mist that you know means it’s going to be a sunny day. I headed out on a cross country route towards Chester across some beautiful Cheshire countryside.

I arrived in Chester at about 10.00am; a walled city with lots of Tudor character buildings dotted throughout the centre. Apart from the high street shop signs (why can’t the make them tone those down?!), it’s like stepping back in time. 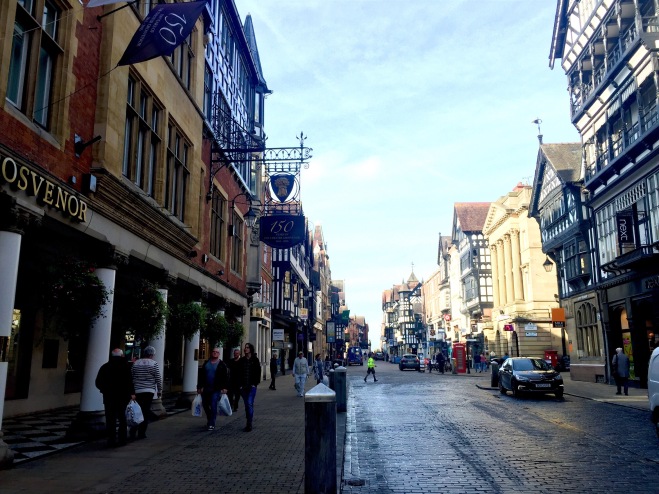 Took me a few moments to find the cathedral, until I spotted a helpful sign. It’s a lovely cathedral but unfortunately the exterior is currently undergoing major renovations, so was decorated with scaffolding. Well, at least they’re looking after it!

I loved it inside though. The nave is beautiful and features some incredible mosaics which are apparently ‘Some of the finest 19th century Pre-Raphaelite mosaic works in the country’. Amazing organ too (fnarr) and Lady Chapel. I sought out the Cathedral Refectory which was one of the best settings for a cafe I’ve seen – can you spot my coffee and rhubarb crumble slice? 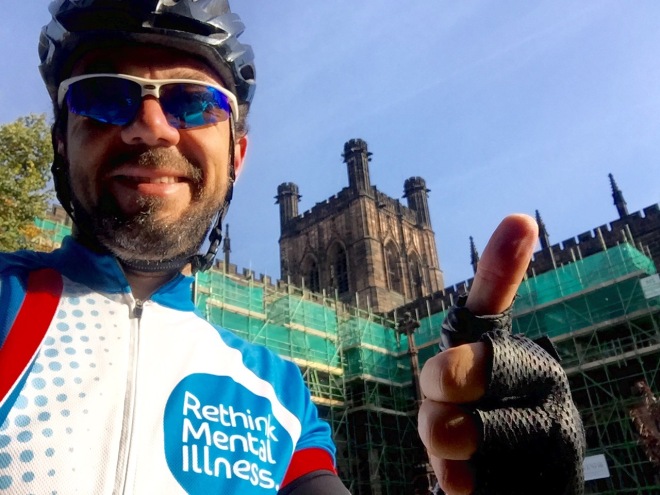 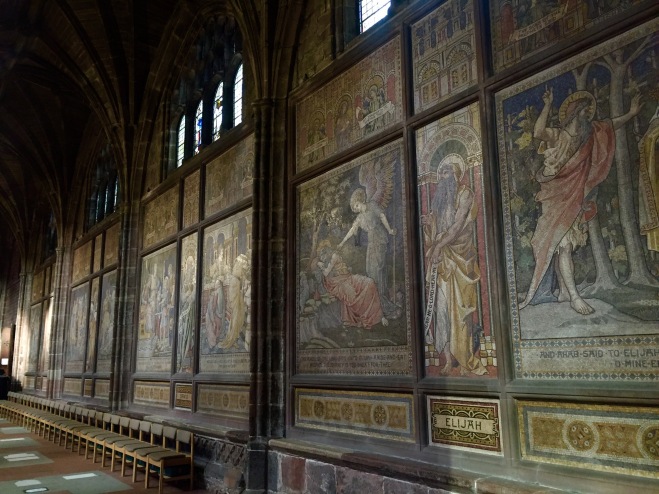 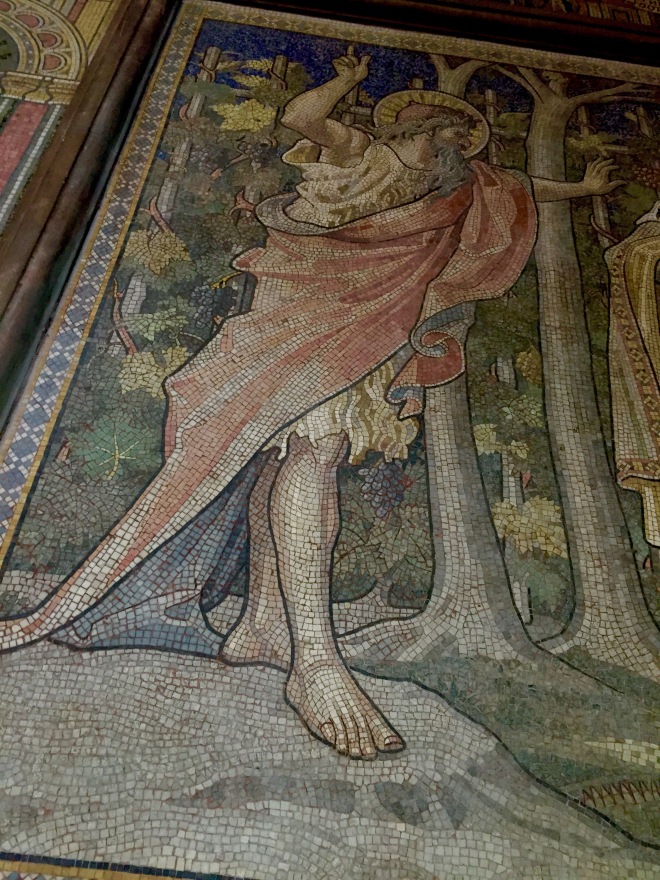 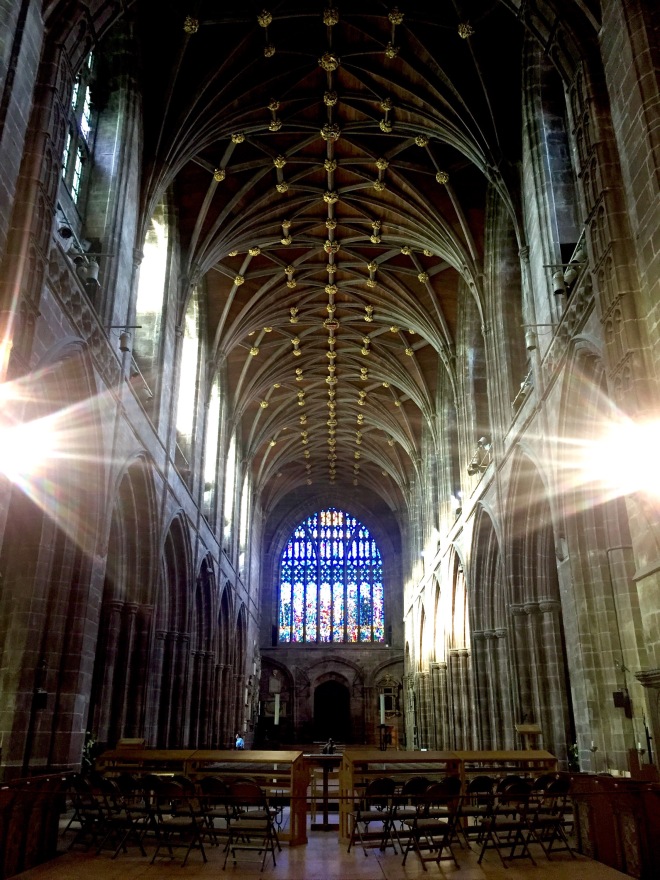 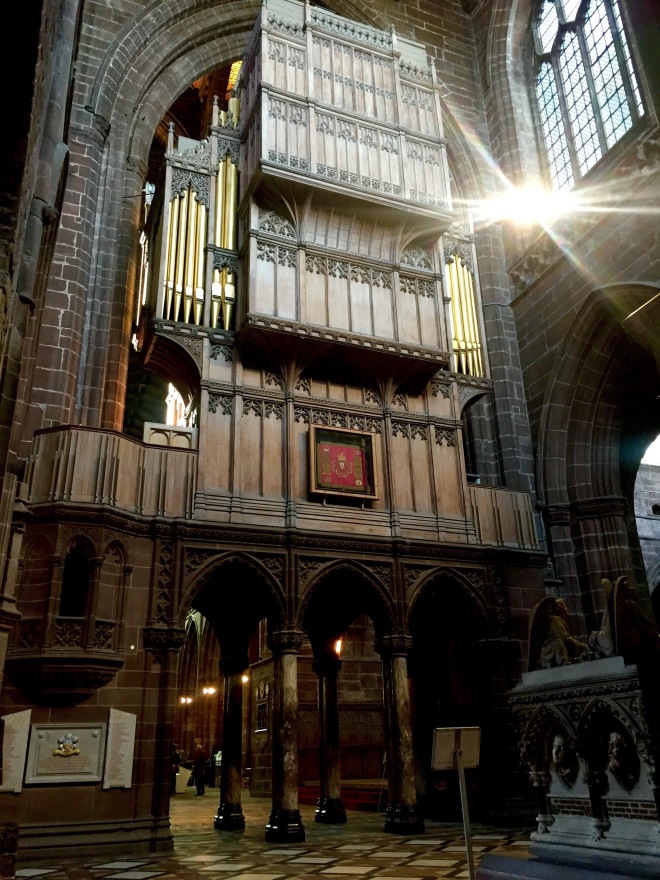 I then headed up towards Birkenhead with a nice tailwind and headed for Woodside to catch the infamous Ferry cross the Mersey.

The staff there were really friendly and even locked my bike in their office while I had some lunch outside. The ferry was as touristy as you like and was even painted like something out of a Beatles movie.

There was also the pre-recorded tour blah with about three renditions of ‘that tune’ which to be honest I’ve never liked. But hey, when in Rome (!) and the views were awesome… 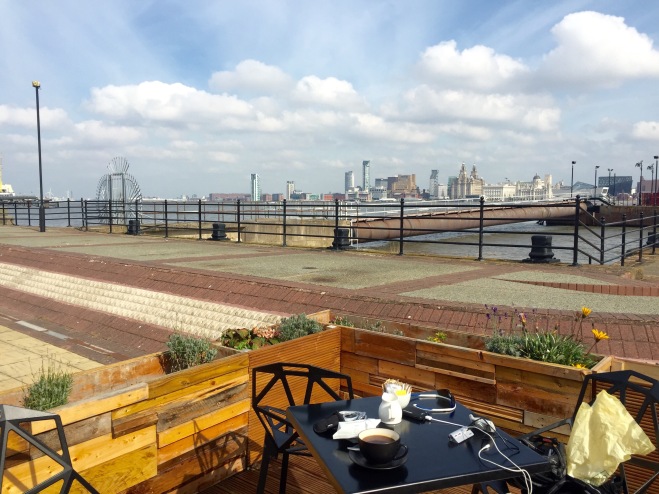 The quayside has been developed really nicely with lots of places to sit around plus the striking museum and art gallery buildings. 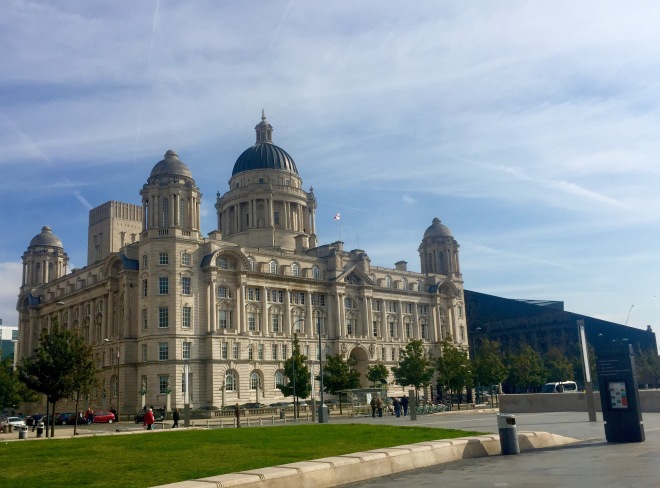 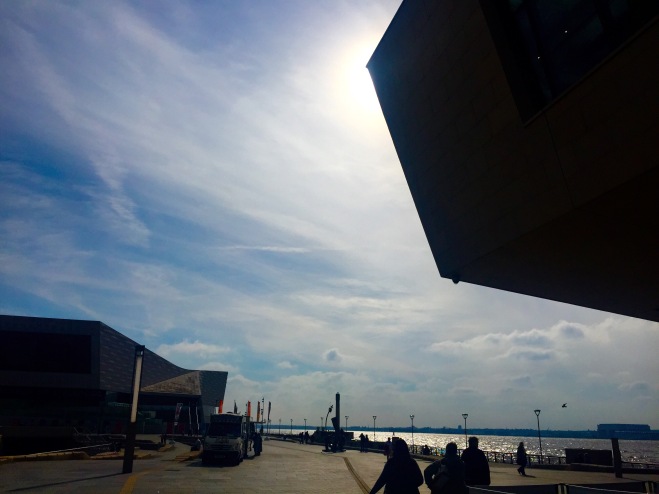 I then headed up to the cathedral which is massive! In fact, it’s apparently the fourth largest in Europe. The Dean, the Very Reverend Dr Pete Wilcox kindly came out to meet me for a photo…

The East window of the cathedral features an amazing sculpture by Elisabeth Frink. The Goldmark Gallery in my home county of Rutland actually has some of her work in stock. So if you fancy seeing it up close then maybe pay them a visit?

The scale of the interior is breathtaking. I tried hard to take some nice photos but they have some very bright spotlights which challenged my photography skills, so apologies! 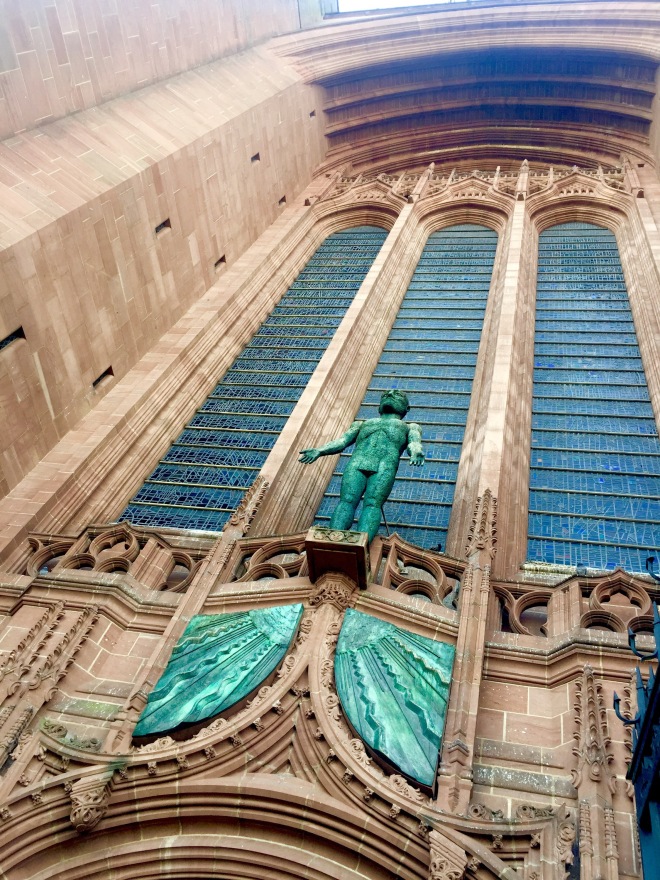 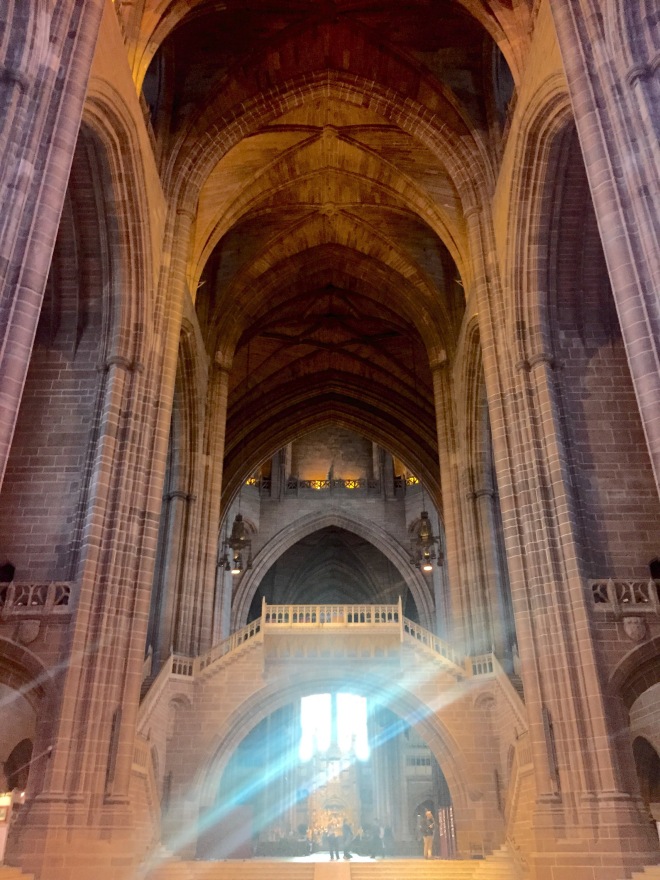 I was quietly pleased with the route out of Liverpool which I’d planned through a residential area and park. After that I stopped in Warrington for a coffee and took a rural route through the lovely Lymm…

Soon enough I arrived in Manchester and towards the cathedral via Deansgate. I got there at about 5.10pm and found it all locked up! I know cathedrals have to close but this caught me out and I was a bit disappointed to be honest. But hey, there you go! 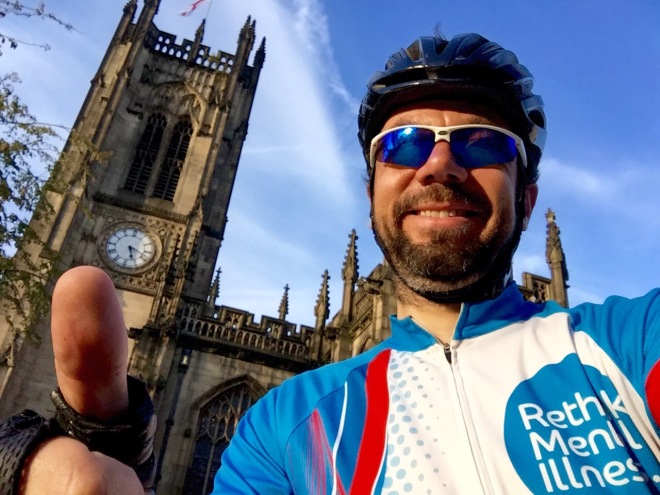 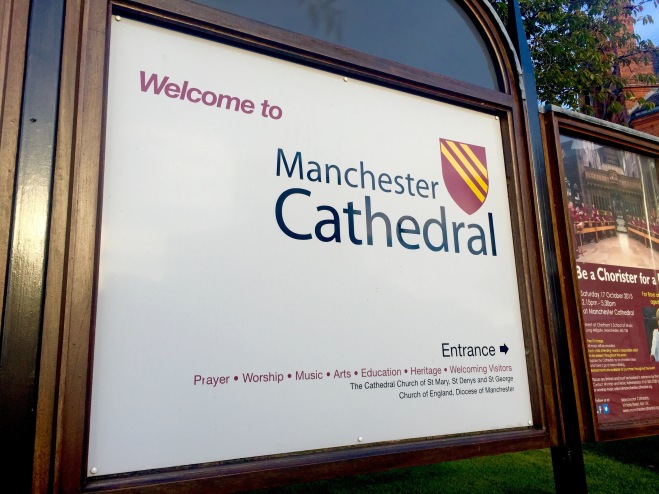 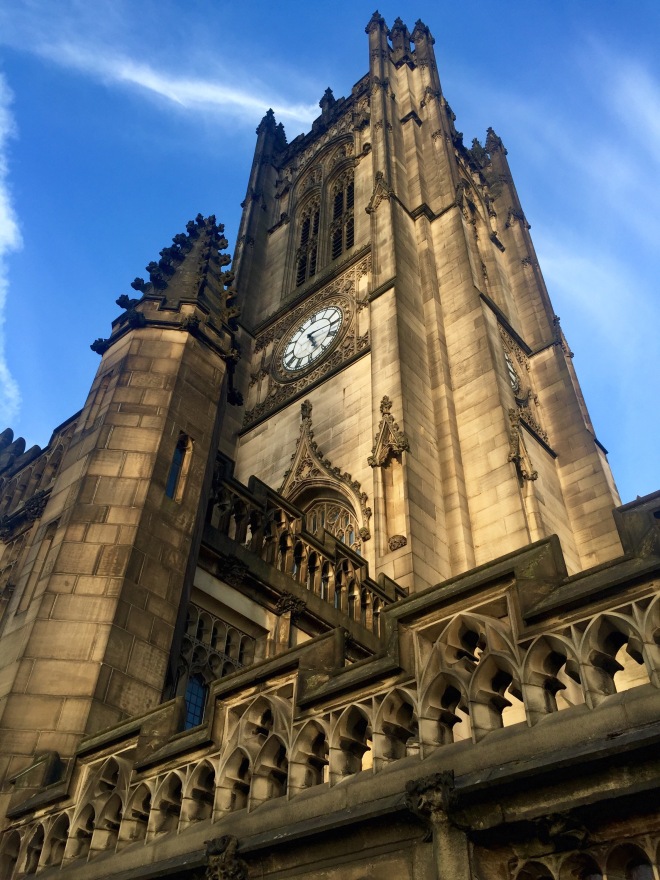 I then decided to bag some more miles and headed up to Blackburn where I intend to visit the cathedral in the morning. 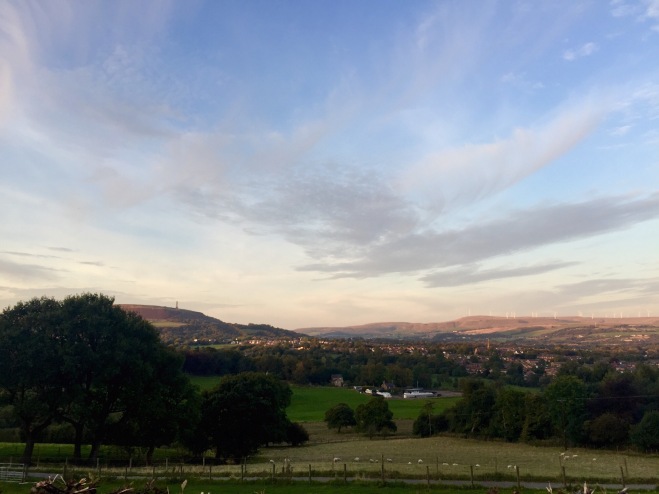 I checked into Premier Inn ‘Blackburn South’. Comfy, friendly, good food but no real ale! So, had to make do with a couple of San Miguels. Such is life….

Deep breath and ride to Carlisle tomorrow.  Forecast is great again and I’m actual looking forward to riding through the hills and enjoying the views!